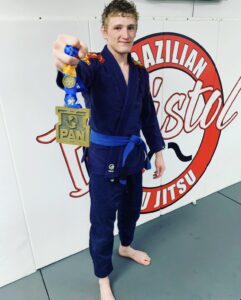 Coach John joined Bristol Jiu Jitsu in late 2018 looking for a new way to be active and competitive. After finishing up Nursing School at Virginia Highlands Community College, Johnathan eventually pursued his passion to dive into Jiu Jitsu full time.

As of 2020, Johnathan Waid has competed and medaled at some of the most prestigious international tournaments Jiu Jitsu has to offer. The latest being 3rd place at the Pan-American Championships hosted by the IBJJF.John was already interested in training martial arts after graduating from highschool; however it wasn’t until he learned that a few of his friends trained at Bristol Jiu Jitsu that he decided to give it a shot and see what all of the hype was about.

There are a lot of reasons why John trains but he believes it really comes down to the camaraderie and the uplifting atmosphere that Logan and Taylor have created. “We’re all constantly pushing each other to be better versions of ourselves.”

One of the main reasons John enjoys teaching is because he thrives working 1 on 1 with others, he feels like this approach enables the student to better understand the techniques of Jiu Jitsu.

Johnathan loves Jiu Jitsu because it forces him to take a closer look at all of the little details involved in the techniques, details that you may not even realize until you start breaking the technique down.

John’s major goal in the future is to one day make it to compete for a Black Belt World Championships.